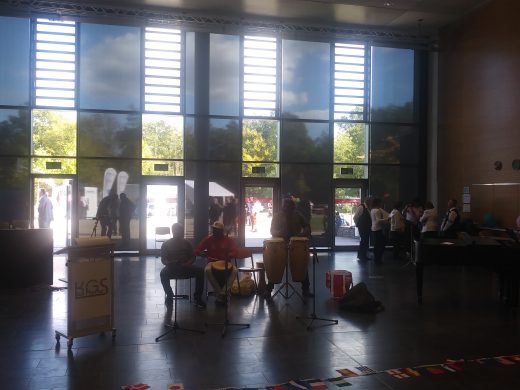 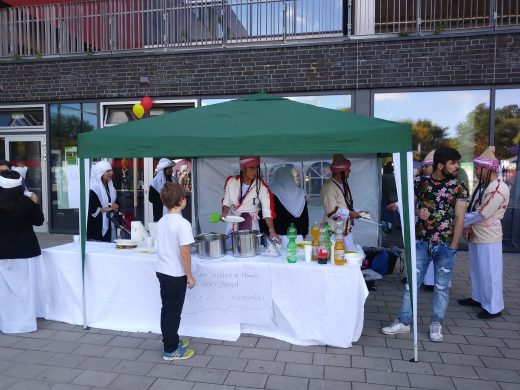 On Monday the 10th February the form 8f and 8e met with their suitcases in the forum of our school at half past 8. Mrs. Papastefanou and Mr. Ceylan counted the students to see if everybody was there. At 9 o’clock the suitcases were packed in the bus, the bus driver named Heinz explained the rules for the Bus to us and we started our trip with a little delay. That was very exhausting. On the trip, the teachers told us the room reservation, I was with Greta, Cinja and Sophie in the room and we enjoyed it.

When we reached the Hostel, the secretary explained us the rules of the House. Then we got our keycards for the rooms and went upstairs to room 204. There we chose our beds and laid down to relax.

At 3 pm we joined a city tour of 2 hours with cathedral visit. Unfortunately the tower was closed, so we couldn‘t get upstairs and had to postpone it.

Because we didn’t get lunch in the hostel, we had to get our meals at Mc Donalds or other fast-food restaurants, but that was no problem for us.

In the evening when we were in the hostel again, I bought LANkeycode for 10 euros. Later we visited the boys Aron, Maik and Leon and chilled and laughed together but for sleeping we went in our room again.

Greta fell asleep immediately, but Sophie, Cinja and me wrote messages on our mobiles. Suddenly Cinja got a terrifying phone call. That was very scary, but the person apologized, it was a silly joke. After that we went to sleep. The next morning we had to get up very early, because we had to be at 10 o’clock in the Fc cologne stadium. It was very interesting, to learn something about cologne culture and the stadium. In the afternoon, the teachers gave us 3 hours free time to relax and to stroll in the city. At 4 pm we went to the Chocolate Museum, but that was really boring, because we had so much time. When we drove back to the hostel we watched TV and rested in our rooms.

At 9 o’clock in the evening we made a ’Spooky Torchlight tour’.

It bored me to death. Everyone thought we were brought into a house where we should (get) frightened. But a guy led us through Cologne and told us the story of the brownies of cologne instead. That was not scary!!!

On Wednesday at 10 o’clock we went to the Odysseum, which was very awesome, because we had to play a lovely game. Unfortunately we finished it earlier than planned.

For lunch, we ate at Mc Donalds again and then we climbed upstairs the 533 steps high cathedral stairs. It was horribly difficult, because the stairs ran around in circles.

Then we had a short but relaxing break till we went at 6 pm to the film studios. There we saw the sets from ‘Unter uns’ or ‘Alles was zählt’. I am a big fan of these series, so i was very lucky to see the place where my favorite TV soaps are filmed. After that we were very tired, that’s the reason why we slept early.

On Thursday we had to get up early again, because we had to be at the streetcar to the zoo right on time. At the zoo we saw many animals and it was very beautiful. At the sea lions it was feeding time, that’s the reason why it was the best of the zoo. When everyone finished the walk through the zoo, we met at the entrance and drove together on the ‘New market’. We were allowed to go shopping, totally comfortable. Unfortunately it was raining cats and dogs. Nevertheless I bought a pullover a, pair of shoes, a pair of socks, some sorts of bling bling and a cap.

Our parents gave us 100 euro for our own disposal.

When we came back to the hostel drenched to the bone. We turned on the TV and changed to warmer clothes. Then we snuggled together in the king size bed and watched some silly things on TV.

On Friday we got up at 5:55 am, to be ready in time. Greta and I packed our suitcases, what Cinja and Sophie had done the evening before. Then we got ready for breakfast, because at 9 o’clock the rooms had to be clear and we had to be complete for the trip home. That was exhausting, but funny on the other hand.

At half past 9, we had to be in the lobby with our packed suitcases and bring back our Keycards.

As a result of misunderstanding we thought to be in the lobby at 9 o’clock, so we had to go up and downstairs two times with the heavy suitcases, luckily there was an elevator but nevertheless it was very stressful.

Finally at 10 o’clock was the departure from Cologne, but the bus had a little delay. The driver had an argument with a truck driver. On the one hand it was funny, but on the other hand we only wanted to go home.

On the trip, it was funny again, because everyone clapped for Mr. Ceylan to undress himself, although there was no reason for it. When we reached our school at last, some of us wanted to go back to Cologne again, but not me. I was happy to be home again. Nevertheless it was the most awesome class trip I was ever part of!! :D